Decoration of the Royal Room

The walls of the Royal Room were decorated with stuccowork and wall paintings in the secco technique. Each wall was divided vertically by stuccowork pilasters. The lower parts of the walls were covered with colorful painted panels, while on the upper parts, which were left white, "hanging pictures" were painted imitating painted wooden plaques, which in turn imitated windows with open shutters affording views of imaginary landscapes. The paintings even included illusionary "strings" and "nails" for suspension and "clasps" for closing the shutters. A few similar "hanging pictures" were produced in Italy in 20–15 BCE .

The paintings in the royal room may have been meant to stimulate conversation. The Egyptian motifs appearing in some of them, such as the crocodile and palm trees, are also found on coins of Augustus minted after the Batt le of Actium and the conquest of Egypt, and probably commemorate this decisive event. 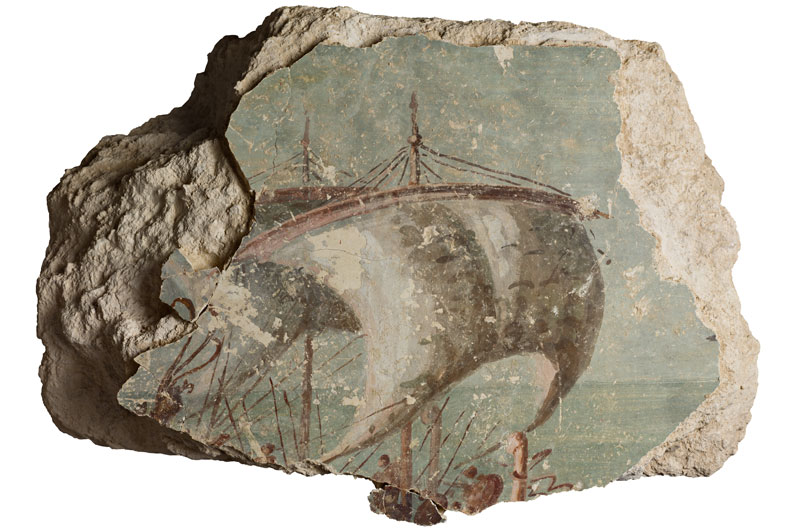 Large fragment of a wall painting depicting part of a nautical scene featuring ships in battle, from the Royal Room at Herodium, 20-15 BCE. SOAJS

Photo © Israel Museum, Jerusalem / Meidad Suchowolski
Update Required To play the media you will need to either update your browser to a recent version or update your Flash plugin.